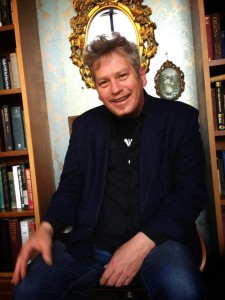 Shane Hollands has been a performance poet for over 20 years and instigated the Auckland based poetry troupe ‘The Literatti’ as Creative Director for the collective’s initial year. Shane is also front man for the band ‘Freaky Meat’ & was half of beat-speak act ‘Beautiful Losers’ with musician Paul Williams.
Shane created and has run the national anual event The Kerouac Effect for over 8 years. Pairing Musician with Poets in Auckland Wellington and Melbourne.

Shane has performed his work from tip to tip of New Zealand & in Melbourne, Australia. Preferring people to see him perform live, he avoids submitting though his work has made its way into Live Lines, Side Stream, Tongue In Your Ear, and some independently published collections.

For links to his work with Freaky Meat see:www.facebook.com/freakymeat