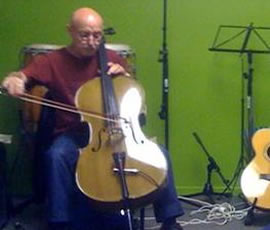 I have been singing and playing music since I was about 4.Got a ukelele when I was 7.Started playing guitar when I was 12.My first band played at end of year 4th form party.
I did lots of small acoustic gigs in my teens.Played bass for a while in the early 80″s.
Began writing my best songs in 87. Did lots of folk club acoustic perfomances. Did 2 years busking in the early 90’s and had a band in Whangaparaoa till 95. Did lots of music after moving to Rotorua. Came back to Auckland in 1999. Played all over Auckland since 2000 anywhere I could. Also started to play cello. Since then I have released 4 albums. Teamed up with Shane Hollands in 2004 to form Beautiful Losers. Music set me free.