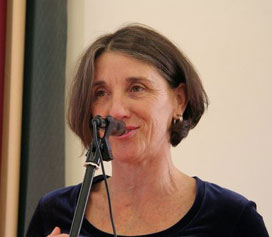 Kirsten Warner’s poetry has been published in Landfall, Takahe, Bravado, JAAM and in the collections Our Own Kind, poems about animals, and Just Another Fantastic Anthology, Auckland in Poetry.
She was the joint-winner of the Landfall Essay Competition in 2008 with creative non-fiction concerning history, colonisation and creativity.
She has worked widely in journalism, television, written television drama, published, broadcast and won prizes for poetry and short fiction.
She is currently finishing her first novel.
Kirsten is a founder member of Printable Reality, the organisation committed to raising the profile of poetry and spoken word in New Zealand, and has co-ordinated and MCed monthly performances at The Pah Homestead in 2011.
Poem “One dollar eighty” published in Poems4Peace Anthology 2014.