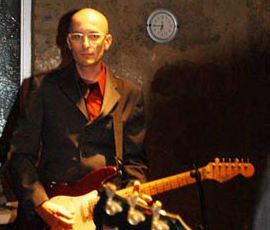 Igor Cubrilovic is a composer, producer, and a guitarist.
Glacier Series is set of compositions which were composed over last 3 years, since he relocated from New York City to Geneva, Switzerland.
Igor was a member of Jonathan Kane’s February and produced both the luminous first and long awaited second albums.
He was a lead guitarist in Rhys Chatham Guitar Army, and is now active in the European Improv scene with Duet/Duel Series, and composes for film and modern dance.
He studied architecture in Belgrade, sound technology in Stockholm, sound installation in London, and is now pursuing his interest in psycho-acoustics and traditional music of the Balkans. He does not like to record his work.
Igor composed and performed music for the first ever Printable Reality show “Pagan Chew” in Greeley Square Gallery, New York, US in August 2002.
More