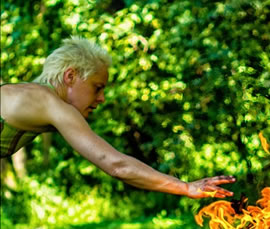 Singing poet and spoken word performer Sandra Sarala was born and raised in Dunedin and kept escaping north until getting stranded in Berlin 11 years ago.
On the way she performed in Wellington (with Red Mole’s Roadworks Company), South Korea, Poland and Italy, as well as in Berlin.
She co-founded the ensemble Polynushka whose CD won the German Record Critic’s Prize for folklore in September 2008. Her highly commended poem ‘Spelling’ won third prize in this year’s Robert Burns Poetry Competition.
You can hear a couple of her spoken word pieces here