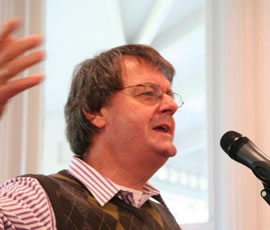 Writer and peace-advocate, Arts graduate of Auckland University, he has been involved in a number of peace and cultural initiatives in Colombia, Chile, El Salvador, U.S.A. and New Zealand and has been the founder and organiser of many writers’ workshops and cultural gatherings in New Zealand, Great Britain and Colombia.
A painter, musician and the author of a number of plays and novels, he has published twenty-one collections of verse. In 2004 he was finalist in The Wellingtonian of the Year Awards. His verse collection, Leaves of Light was awarded The House of Poetry International Poetry Award for 2005. His latest verse collection is entitled The Oracle of Alexandria (2009) and his most recent novel, The Guardian of The Shield (2012).
His work has been translated into Spanish, Japanese, Czech, Arabic, Turkish and Greek. Most recently he and his wife were performing poetry in Valencia, Barcelona, Brussels and Prague.