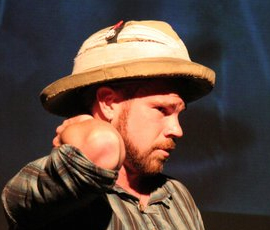 Randall $tephens is the last angry man, he was the first one too.
He doesn’t suffer fools.
He doesn’t ride a bike that doesn’t have brakes.
He doesn’t get stuck in traffic.
He doesn’t use phrase like ‘l-o-l” and doesn’t tell people about his new kettle on facebook.
He does not believe in fairies (plop!).
He doesn’t play nice with the other poets. Randall $tephens does write poetry, He writes about all dinosaurs and cycling and travelling and breasts and being angry and being happy and sex at inappropriate times. He performs. Well. He does come from Melbourne.
He is on his way.