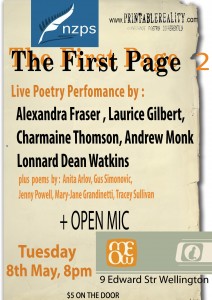 IMAGINE : Dostoevsky wrote a first page of what would have been one of the best known novels in history.And then he woke up in the morning and concluded that it was not good enough, decided not to write that play but to write a poem based on that FIRST PAGE that he wrote the previous night.

That is an example : YOU chose your most ( or least ) favorite book (ANYTHING: prose, poetry, biography, science, front page of a newspaper the day before a significant day in history), “take out” that FIRST PAGE, be that writer that morning and WRITE A POEM.

… Resulting poems were performed at special events in Auckland and Wellington.

Some photos can be seen on Printable Reality FB page

Some poems from the project :

Based on the first page of Where the Wild Things Are by Maurice Sendak:
The night Max wore his wolf suit he made mischief of one kind.

but only in a dream

I took my own private boat out

to where wildness is not a dirty word

out past the boundary line

past the picket fence

past the white paper walls

past the edge of ‘don’t see, don’t speak, hear no evil’

to where I can howl and beat my chest

to where I can cry and chase and feast

where I can be that wild thing

It’s fear that does it

It’s being fenced in that does it

that gnashes its horrible teeth

and bares its terrible claws

that bites under my skin

begging to be let out.

I want to sail out of safe waters

to places with deep, dark lakes

you have to slash your way through

places where they don’t whitewash their beasts

where I can circle and circle

where I can be sharp

where I can kick some filthy demons in the teeth.

I want to be queen

I want to tear down the wallpaper

until I have run around the island naked

But now I am awake

And this skin is a prison for this wild thing.

Being a beast would be easier

beasts don’t apologise for this hunger to be wild

and they always fight back.

Based on The First Page : Albert Camus/The Plague

What is the easiest way to get to know a town? Let your senses find out

how the people in it live, work and have fun. In our little big city all

three are usually done along the same lines, with the same pragmatic, casual air.

The seasons barely change, and nothing else. All that tells you that spring’s

coming is the rain gets warmer and sails unfurl out on the harbour. During summer

the pohutakawas paint the blues and greens red. Autumn and winter strip the town back to grey.

The truth is that the town is bored, and we devote ourselves to cultivating our sections.

And then The Unusual Event occurred. What it is that makes us so settled one day

and then overnight changes those shades of grey to full and joyful black?

Who am I to tell what actually happened? Who am I to surmise? They came and they play!

Around the Southern Cross it seems the stars are shooting, the Pointers are partying

with us in the Cloud. We are so lucky to be here, painted faces, hosting the world.

Now – conjure up a picture of a town with seagulls … and ferns flying, pumas and wallabies prowling the beaches, where you hear the beat of dragons’ wings and the rustle of maple leaves,

a thoroughly positive place for many Octobers to come.

I am woman by Ila Selwyn

My Boys by Jai McDonald

So Unique and one of a kind

These are my boys

The sort that have so different capacities of intellect

All these are my boys

These fools are my boys

These brothers are my boys

Remember the time we played touch on the beach during Queen’s Birthday weekend in the rain and felt pointless being there?

These memories are my boys

This glue is my boys

These winning streaks are my boys

These boys are not the image of your prepubescent teen/or eighties wearing fluorescent tees and tore up jeans/Nor the ones that stand outside corner stores or shopping malls/but these are boys that reinvent life and assist in the building of these shopping malls/who make life worth living and seeing them just gladden me/and bring more purpose into my life and open more clarity/Is it wrong to speak so highly of them you may say/well wouldn’t you take pride speaking about your own family?

Backing each other up/

Owning up to our own faults/

Yearly memories and growing together as one pulse/

Separated by culture but cultured in our own way/

Things that got in the way.

Things that were unmistakable signals…

Things that were done, regardless. Things we knew were coming…

Wanted; threw away; loved. The ‘th’ blend – all over the place.

The free drinks in the jungle Hey – attach a camera to the head of a cheetah! What happened to that woman tied to the telephone pole? Do you know where the safe meeting place is? If you’re on Earth, you’re connected to everything…

The godhead? Always, too much fission in her mind The way she walked down the street was not enough to base a relationship on I could never say the word ‘goodbye’ when it was needed I could never find that glorious release.

I kept remembering that ballet of tongues down the phone line Waiting for the screech of brakes & the whirring of the tapes It’s all recorded somewhere.

Give me back my soul & keep your religion

There was an old man

Who went out on his boat

Beneath the tulip sun

Waited for the words

To accept the bait

To be netted upon

For grandeur and humility

Into the torn cotton

Deep within the river-worn lines

That led from cheek

Baked hour upon a tilting

Stage masked as a battered

To become a tale

A parable of simplicity

Except for the fish flash

A smile as bright as

And no second chapter

Another man with leonine

Himself caught upon the

Within the net of a bar

In the Florida keys

FIRST PAGE OF: You Know They Got a Hell of a Band, short story by Stephen King

The yawning, hungry highway. The willows rot in cold swamp.

Monday is a rescue chopper lost in Langoliers, a turn of the world away,

missing it like fish and chips on a rainy school day.

Maine, sent to the end of the States,

The exhausted ashes of the week, the forgotten day, despair

All those unspoken words blowing smoke and false hopes

up my pensiveness til the back of my throat

swallows that loneliness felt at the hold of your releasing choke.

Was nothing more than these

sophomore ghosts on my antique floor

reaching up from the granules of my fragile core.

only this….and nothing more.

It raps and it taps…nothing more.

It holds me up as my madness explores;

searching your walls – a Mac truck with butterfly wings-

I wait, entranced in your store, for the occupying thoughts

at my chained, chamber door, tapping its veins

in a fixed grip of impending, eminent gore! –

slashes the acknowledged necessity to ignore

It raps and it taps…nothing more.

Invoking my unnatural desire to implore,

I challenge any hallow-stained ghost from this floor;

I welcome their passive strokes feathering the balance inside

my aggressive pokes tethering the reality outside by the scores!

would have to be better company

than the chore of this…nothing more.

It raps and it taps…nothing more…

It raps and it taps…nothing more…

It raps and it taps….nothing more

It raps and it taps….nothing more