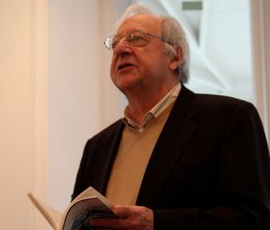 Peter Bland will read from his 2010 collection “Loss” written after the death of his wife Beryl in 2009, and from current and early love poems.
He is possibly best known for his memorable role as a small-town conman Wes Pennington in the film “Came A Hot Friday”, but is equally acclaimed as raconteur, broadcaster, writer and poet for children and adults, published in new Zealand by Steele Roberts.
Peter Bland immigrated to New Zealand in 1954.
He was a co-founder and artistic director of Wellington’s Downstage Theatre, and since the 1970s he has divided his time between New Zealand and the UK and published widely in both countries.
Guest poet @ In VOICE and Music @ Pah 22 July 2011 National Poetry Day