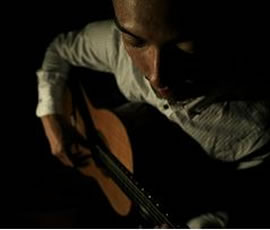 Kotaro Nishishita, a classical guitarist who beganto play classical guitar in 2004 inspired by Narsico Yepes.
He graduated as a Bachelor of Music in Performance at the University of Waikato (2006-2009) studying under Katya Skandera, Federico Quercia and John Couch.
He has won 2 best performance prizes and a Merit prize from Lilburn Student Composition Awards in 2006 and 2008 by performing his own composed piece of music.
Currently he is having lessons from James Tennant(Cello) and Tomonori Arai.
He is based in Auckland.
Became a member of Printable Reality collaborating with poets, dancers and visual artists around Auckland. Untill AUT Dance Company, Koutaro & Gus