These Wandering Feet at Q Theatre 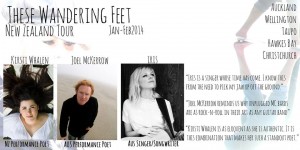 Come and join us at Q Theatre for Joel McKerrow’s last performance in Auckland as he completes his nation-wide poetry tour. Presented by Page 2 Stage, Joel, Kirsti and Iris will take you on a lyrical, poetic journey, exploring what it means to be a pilgrim of the heart. Accompanied by a number of Auckland’s finest and fiercest poets.

Joel McKerrow is an international touring performance poet,writer, educator, youth worker, thinker and activist. He is the founder of The Centre for Poetics and Justice, has competed in the Individual World Poetry Slam (2012), has published two books and three spoken word albums.

Joel has toured extensively throughout Australia, US, Canada, UK and Europe. With a passionate performance style he has been commended by Canadian performance poet Virtuoso, Shane Koyczan as, ‘an exceptional spoken word artist…fiercely political and humane’. And by the Australian National Poetry Slam Champion, Luka Lesson, as, ‘a true leader in Australia’s performance poetry scene…A man who can tear a roof down with his performances and bring tears with his subtle eloquence’.

Hailing from a rustic North Carlton shoebox, front woman and songwriter Richelle Boer (Iris) is no stranger to the music scene, having (in a previous life) warmed the stages for some of Australia’s most loved artists, including Ash Grunwald, James Reyne, Mark Seymour, Vanessa Amerossi, Adam Brandt and even Mr Shanon Noll himself. ‘Iris’ delivers a sound characterised by sweeping vocals, grand build sections and a gut wrenching lyrical and sonic explosion of emotion and color with every performance (think ‘Feist’ vs ‘Art of Sleeping’).

Kirsti Whalen “is as eloquent as she is authentic. It is this combination that makes her such a standout poet.” She is a multi-slam champion, has featured at numerous slams and poetry events and has won a multitude
of literary awards.

Kirsti has performed and facilitated poetry workshops throughout Australia, India, Nepal and New Zealand. Her background of community engagement has led her to be part of The Centre for Poetics and Justice, to collaborate twice with Amnesty International and to found The Unsaid
Things, a poetry and art therapy program for young adults with disabilities and a desire for self expression.

This will be an incredible night, fusing soul-rattling writing with mind-blowing music.