Home Event POETRY from the SOUL

POETRY from the SOUL 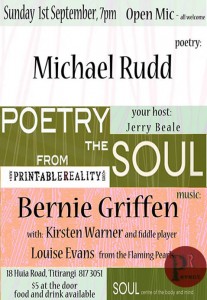 POETRY from the SOUL

Hear me out now: east west, south and north! What a line up we have for you on the first day of spring. An unique opportunity to catch some local legends in action :
poetry by Michael Rudd

music by: Bernie Griffen, with Kirsten Warner and fiddle player Louise Evans from the Flaming Pearls.’

Michael Rudd is Ngati Palangi New Zealander of Aotearoa, Described as an oralist and performance poet, he is also developing his enjoyment of sound poetry, voice and words as an instrument and all that. Also enjoys creating/performing improv poetry Michael has performed and promoted poetry on television, radio, on the street, in bars, trains, buses, prison and a lot of places in between.

Three of the wildly colourful folk-country blues band The Flaming Pearls will play unplugged. Bernie Griffen is well-known in the Auckland music world as the singer-songwriter and front man of Bernie Griffen and the Grifters and as on radio 95 bFM’s long-running specialist Americana music showBorder Radio. Writer Kirsten Warner, who recently performed at Soul as guest poet, sings and plays guitar. Violin-maker and Celtic musician Louise Evans plays fiddle.”