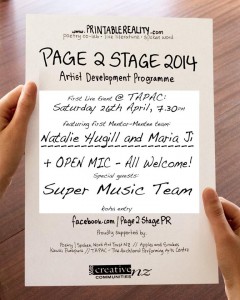 Music by Sam and Erena

+ Page2Stage are delighted to be joining the celebration of National Flash Fiction Month, by inviting two Auckland best known “flashers” : Leanne Radojkovich and Rachel Fenton to share some of their Flash Fiction magic.

***
Raewyn Alexander is a fourth generation New Zealander of French, Irish, English and Scots descent. Born in Hamilton, NZ, in 1955, she’s travelled the world, and now lives in Grey Lynn, Auckland. A Narrative Writing lecturer at UNITEC, she’s published in New Zealand, Australia and the USA, novels, poetry, stories and other genre, such as in Southernmostpoint Guest House from pretendGeniuspress (USA), 2014. A blog about her poetic journey and trees for travel is popular world-wide. Glam Rock Boyfriends, an imaginary memoir, is due in 2014 – ebook and print-on-demand – and so is poetry collection, Our Mother Flew Unassisted, (Brightspark Books).

Hannah Owen-Wright began performing spoken word regularly two years ago, whilst living in Birmingham, UK. She has performed in slams in the UK as well as at Poetry Live in Auckland. She is also intrigued by spoken word performance as an exploration within the sonic qualities of language. As a musician – specifically, a singer – the musicality of language is a primary guiding principle in her performance practices. No doubt what Hannah will produce will be fresh, challenging, and engaging.

****
“Sam Loveridge is a guitarist, violinist and mandolinist who regularly performs with various music collectives. He is the composer and singer for the folk band Adventures of Rhubarb, and a teacher for Lewis Eady’s school of music. Sam met Erena at the University of Auckland’s jazz school in 2011.

Erena Johnson is a composer and poet with a keen interest in vocal improvisation. Among her favourite projects have been presenting the poetry of TS Eliot and Wallace Stevens with a seven piece band, and collaborating with Indian classical singer Balamohan Shingade.

Sam and Erena will be performing a selection of folk and pop tunes.”

***
Leanne Radojkovich has been short-listed for prizes in NZ and Ireland and published in NZ, UK and USA. Most recently, she was a finalist in the 2014 North & South flash fiction competition, and she was highly commended in the 2013 NFFD competition. She shares her work on SlideShare and YouTube and posts flash fiction street art in phone booths, public loos and shop windows. See her website for more.

Rachel J. Fenton, aslo known as Rae Joyce, is a multi-genre award-winning writer and graphic poet and current Features Editor of Flash Frontier. Her work is featured in New Zealand Comics and Graphic Novels (Hicksville Press) and various international journals, and she was Artist in Residence in 2013 at Counterexample Poetics. Based in Auckland, she blogs here.