Maria Ji
~ Mentored by Nat Hugill
SLANT
The narrative as condemnation and creation myth.
Painting lip or painted lip or Freudian slip or lip service? As their stories unfold through the mediums of performance poetry, aerial silks, and music, SLANT invites you to examine the re-imagined lives of Fourth Wife, Persephone, and Delilah.
With special thanks to: Natalie Hugill, Rebecca Bilyard, Hannah Tasker-Poland, and performers.

Kirsti Whalen
~ Mentored by Christian Jenson
Pale in the Hips
A backyard bleeding grapefruit juice and stories.
A story of a girl told in many stories. Many stories told by a girl. Many girls telling many stories. No story ever told by a girl. This girl hasn’t been told by a story. She is made of: handprints. Dad has taken: all of them.

Hannah Owen-Wright
~ Mentored by Raewyn Alexander
[em]bedded/bodied
A queer/trans love story enwrapped in the heart of an ancient empire.
Treading at the liminal space between theatre and poetry, ‘[em]bedded/bodied’ is the latest incarnation of a story that first came into being as a 13th Century French chanson de geste ‘Yde et Olive’, It tells the story of Yde, a trans knight who rises to the highest possible chivalric glory in the ranks of the Roman Empire, through the voice of the Emperor’s daughter, Olive, who falls fiercely in love with him. 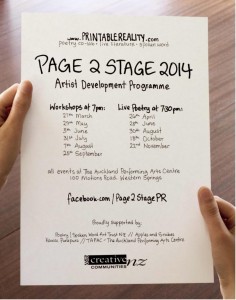