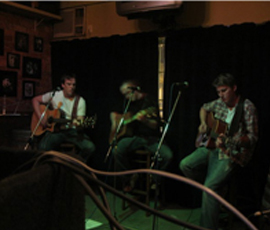 Formed in May 2011 (as weekly musical escapism to ease the monotony of the working week) acoustic guitar trio Bluebird Avenue features guitarists Danny Crocome, Brendan O’Shea & Sam Ogilvie.
Having gathered cobwebs and dust for a few years, Danny’s songwriting machine started ticking over again in late 2010 and has since gathered momentum – the songs you’ll hear at this evening’s performance are a result of this.
The group have been playing venues around Auckland since June, and are working towards recording an album in the near future.